In 1526 he entered the , where he obtained his bachelor's degree in 1527 and his master's in 1529. After completing his studies he taught mathematics at the bursa, one of the student colleges of the university, and married Enge van Aich, the daughter of an established printer. (2)

Vopel became a well-known cartographer and was also active as an instrument maker: (3)

Although his world map and his maps of Europe and the  have been studied in some detail, his contribution to celestial cartography has received less attention. (4)

This paper aims to fill in the gap by describing Vopel's celestial globes and maps, with special attention given to innovations introduced on their initations and derivatives.

In discussing Vopel's celestial cartography I follow existing conventions and denote constellations by their Latin names. Subgroups, such as the Pleiades, are referred to by their English names. Stars are identified in one of two ways: by modern convention or by the serial number from its Ptolemaic constellation. Thus Regulus, the brightest star in Leo, is denoted as α Leo or Leo 8. Unformed stars of a constellation, listed by Ptolemy separately after the ‘formed’ stars because they are located outside the imaginary constellation figure, are numbered as 1e, 2e and so on, with ‘e’ standing for external. Thus the first of the unformed stars of Leo is Leo 1e, the second Leo 2e. (5)

The lasting merit of Vopel's printed globe and maps—or so it appears in retrospect—is the images of two star groups, Antinous and the Lock of Hair, better known as Coma Berenices, neither of which had previously been represented graphically. Their introduction on Vopel's printed globe of 1536 started a process by which the two groups came to be recognized as individual constellations. Since then, many other new constellation figures have been added to the celestial sky, sometimes for unformed stars in the northern hemisphere, at other times for stars newly recorded in the southern sky during voyages of exploration. The impact of Vopel's initiative raises a number of questions including why Vopel introduced the images of Antinous and Coma Berenices and what the reaction of his contemporaries was. Before dealing with these questions, however, we need to look at Vopel's various undertakings in celestial cartography. 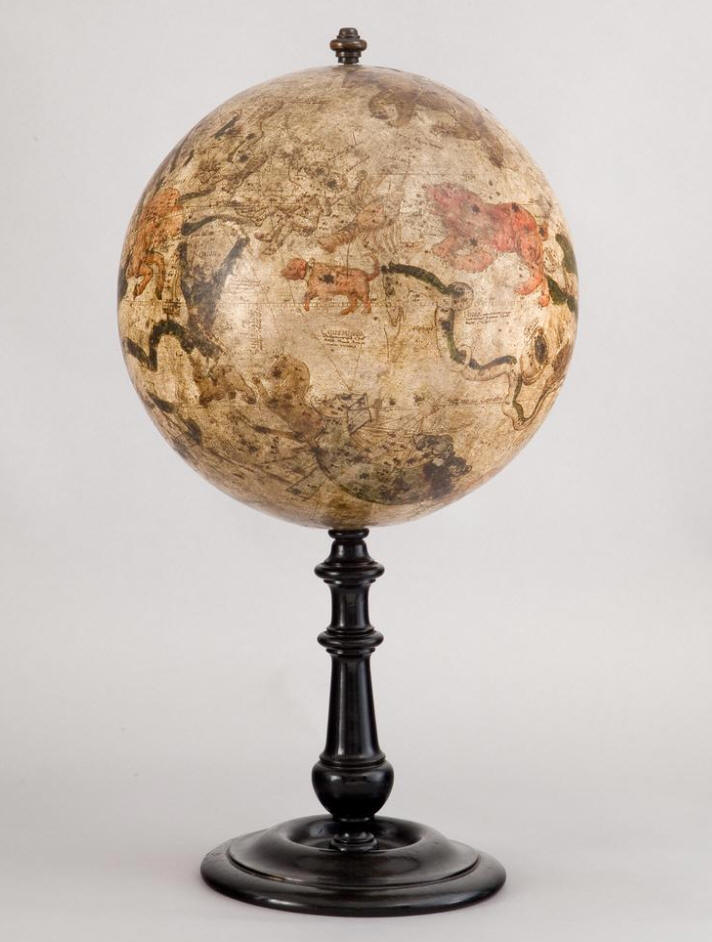 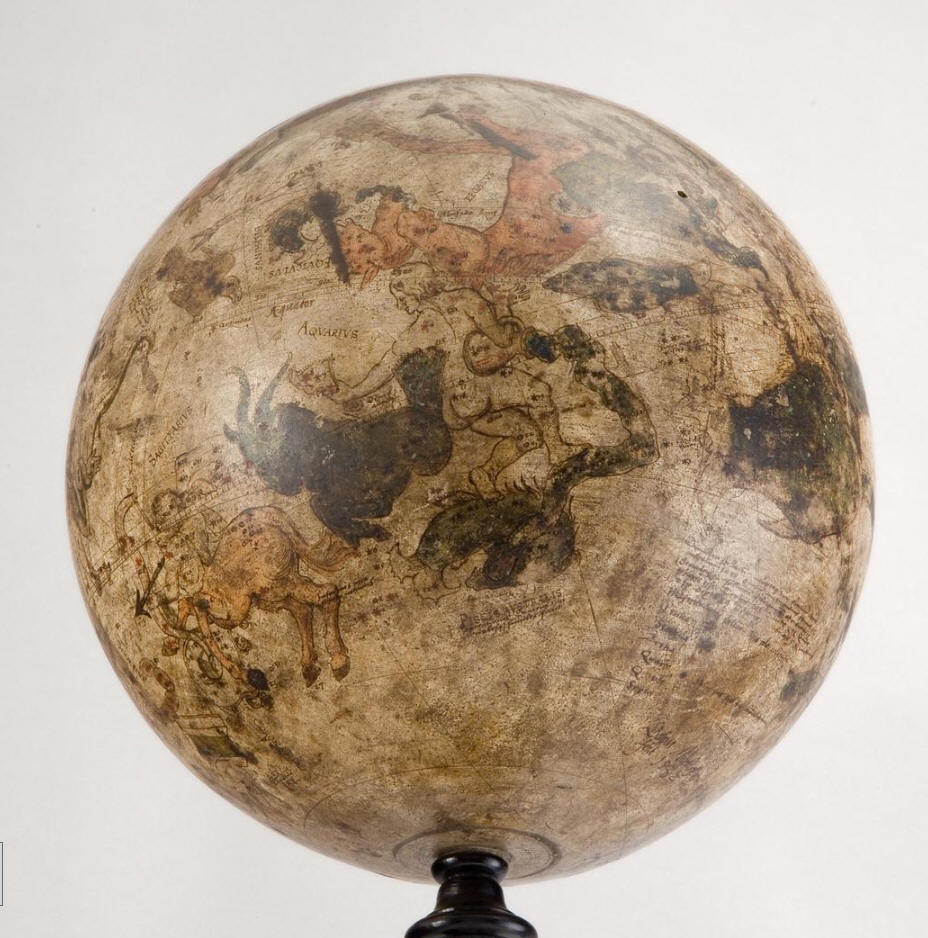 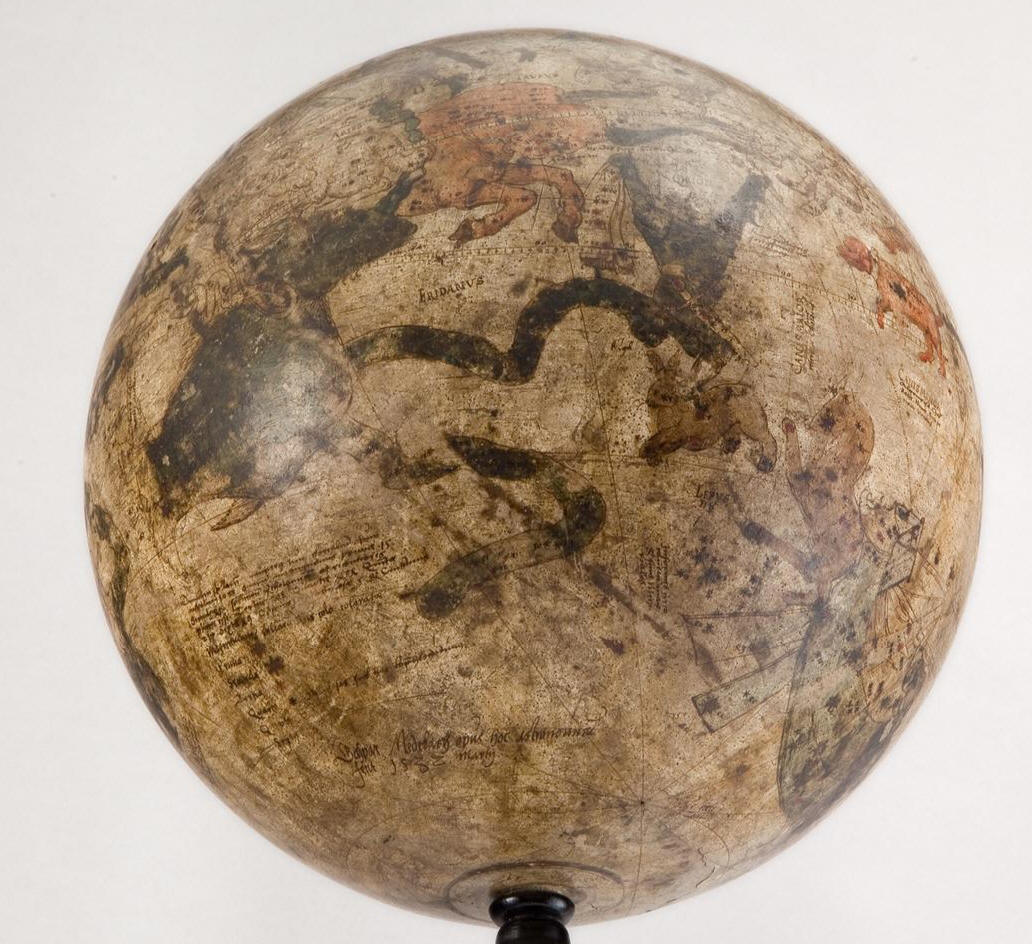 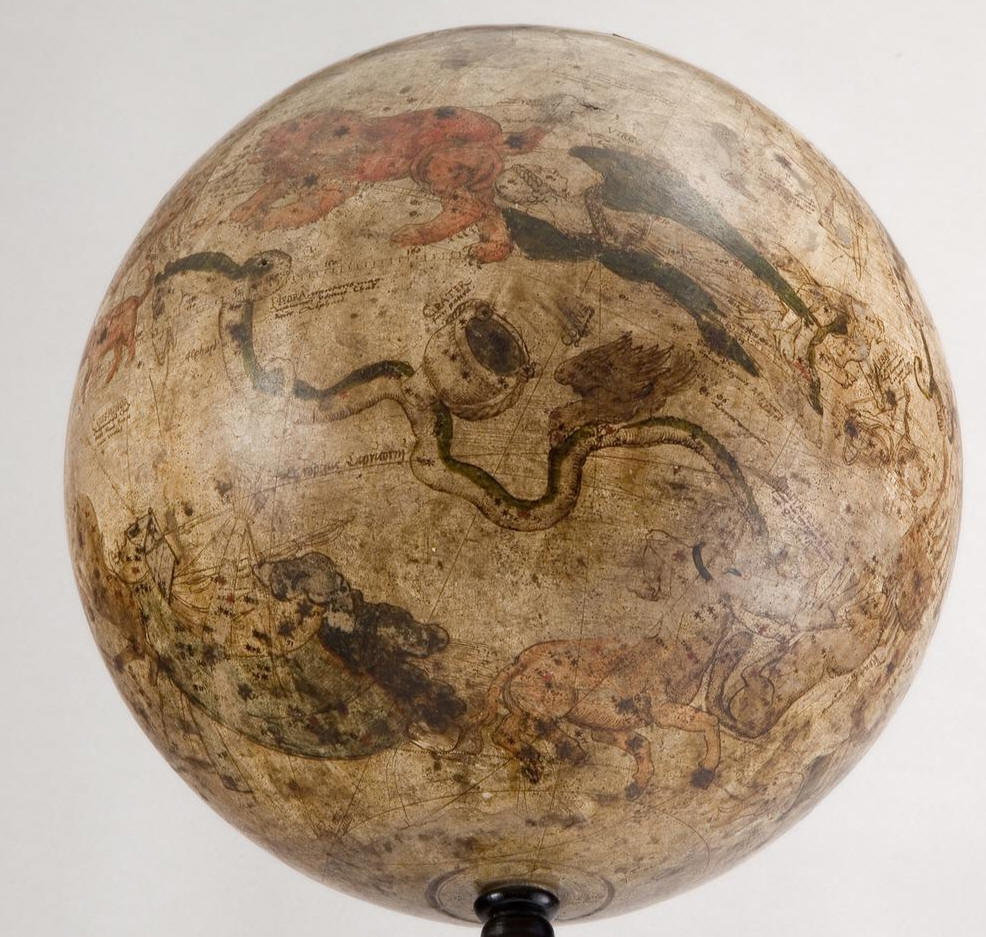 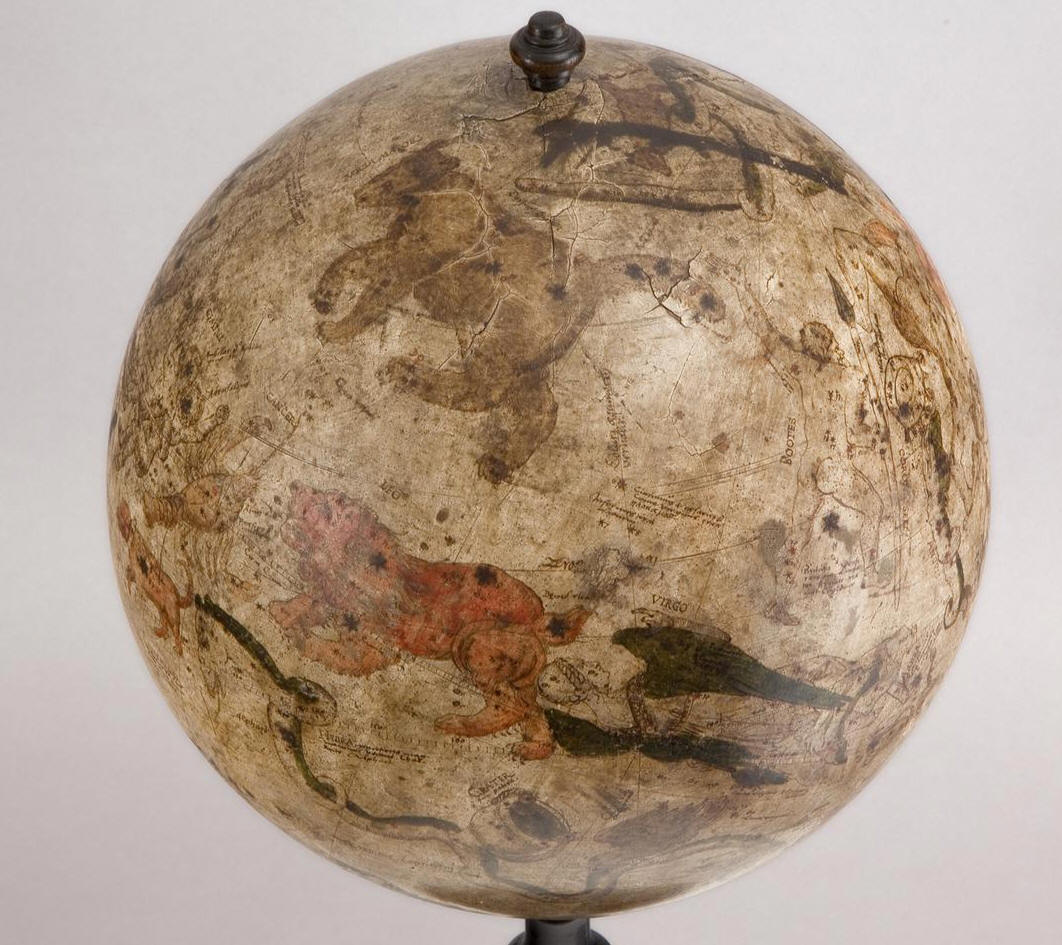 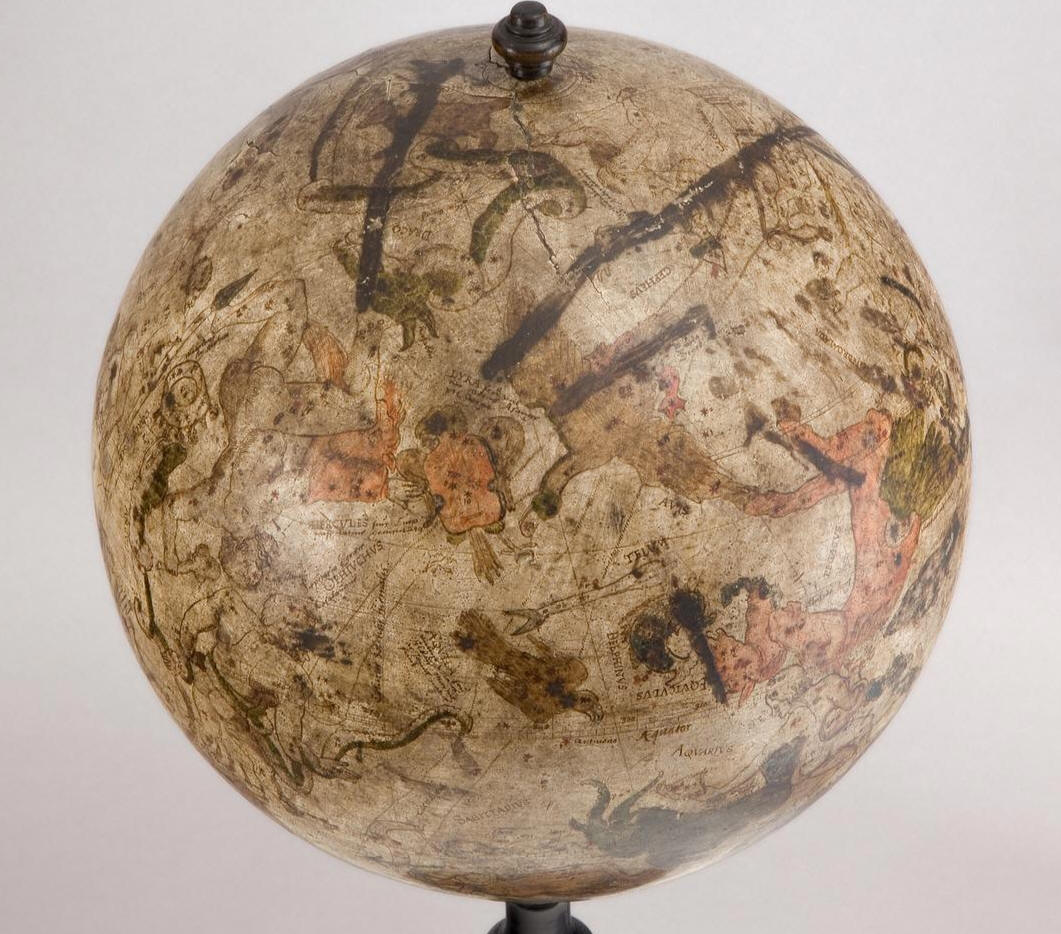 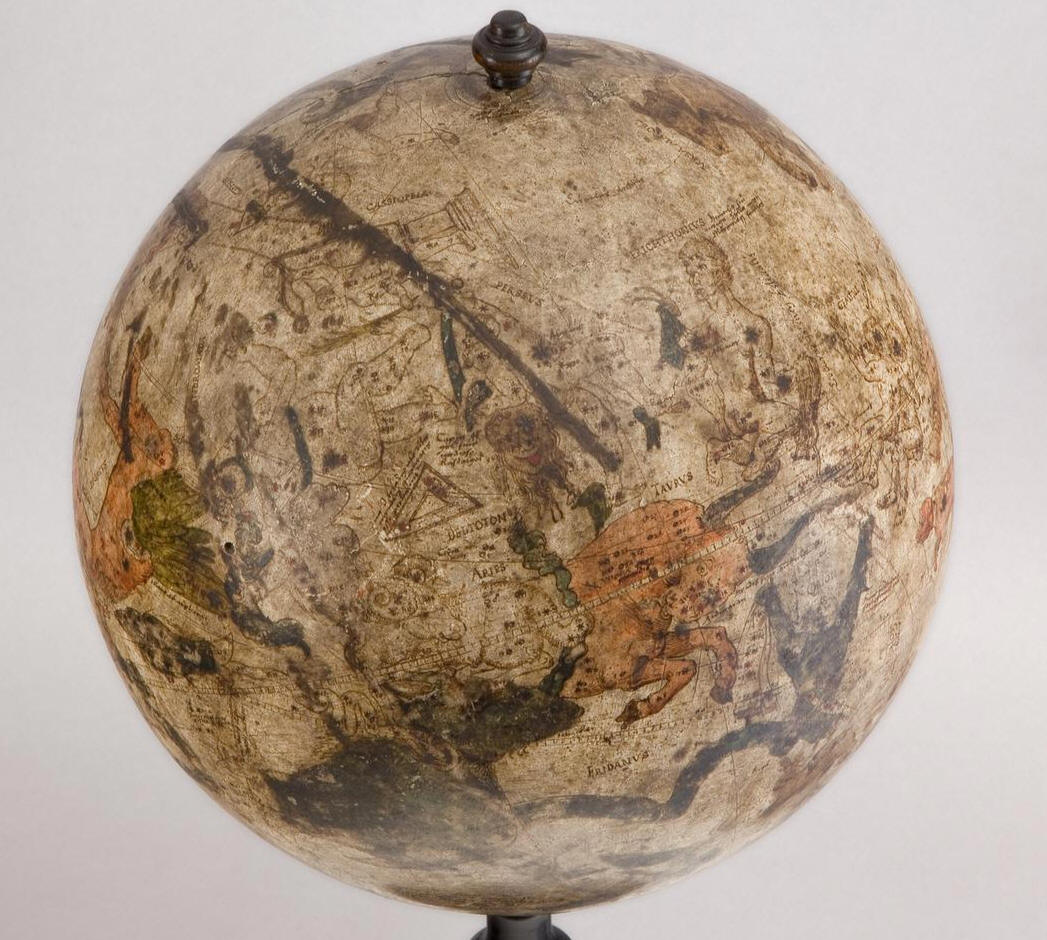 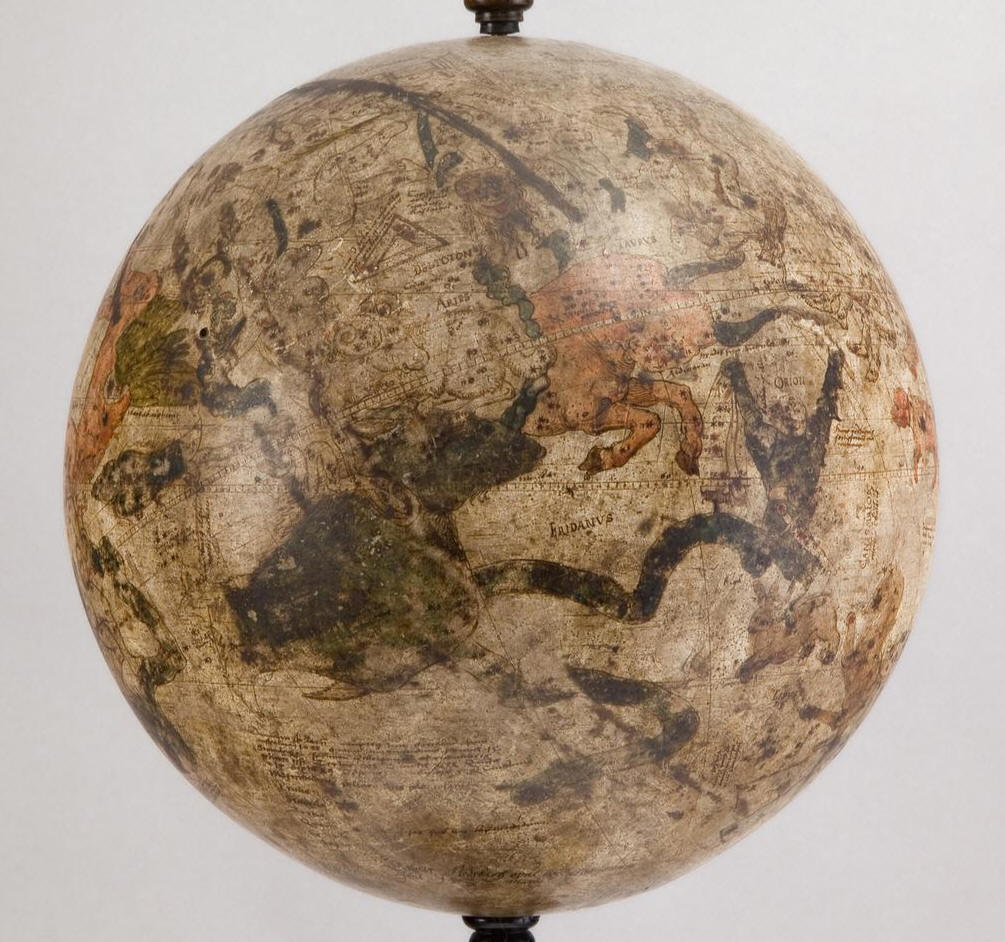 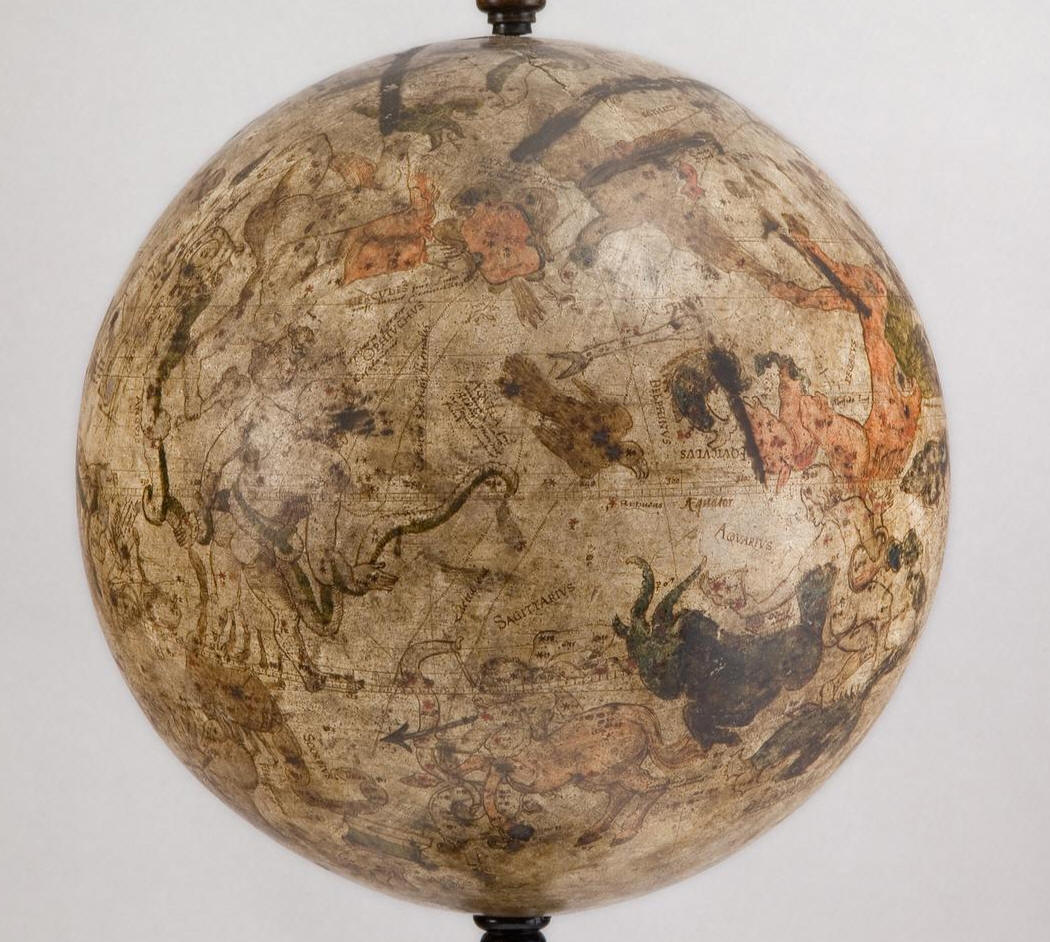 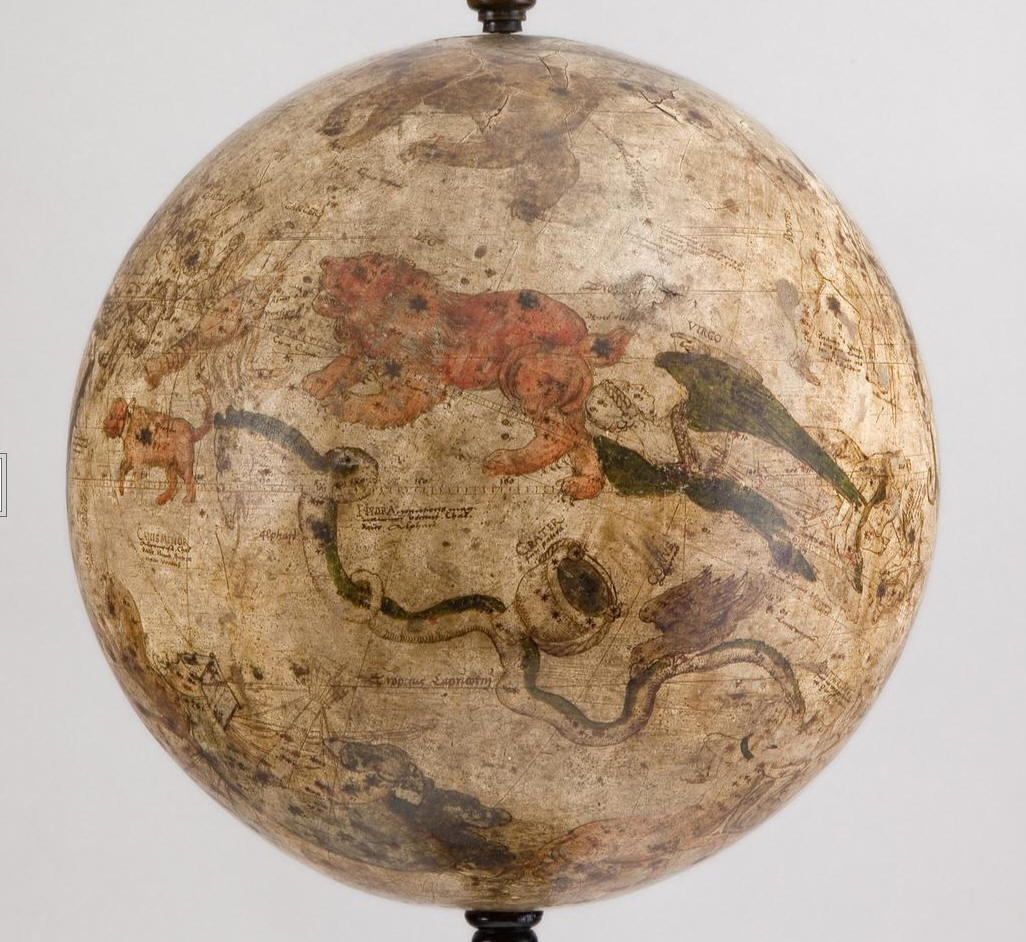 Vopel's earliest surviving piece of work is his manuscript celestial globe of 1532, now in the Kölnisches Stadtmuseum. (6)

It has a diameter of some  , is hand coloured and is signed at the South Pole: Gaspar Medebach opus hoc astronomicum fecit 1532 Martii. (7)

Like all globes made in the Renaissance, Vopel's presents the 1025 so-called fixed stars described in the star catalogue in Ptolemy's Syntaxis mathematica, a second century ad astronomical work devoted to the motions of the wandering stars, or planets. (8)

The fixed stars, discussed in books VII and VIII, serve in this context as a reference grid for locating the planets. The star catalogue is organized as follows:

For each star (taken by constellation), we give, in the first section, its description as a part of the constellation; in the second section, its position in longitude, as derived from observation, for the beginning of the reign of Antoninus…; in the third section we give its distance from the ecliptic in latitude, to the north or south as the case may be for the particular star; and in the fourth, the class to which it belongs in magnitude. (9)

The recorded star positions are valid for the epoch 137 ad, the beginning of the reign of Antoninus. Since precession causes the equinoxes (the points of intersection between the ecliptic and the equator) to drift slowly with respect to the stars in the course of time, the stellar longitudes have to be adapted for later times.

Ptolemy's Syntaxis mathematica was transmitted to the Latin West through Arabic translations circulating in Muslim Spain. The Latin translation made from the Arabic around 1175 by Gerard of Cremona became known in the Middle Ages as the Almagest; it was first printed in 1515. The epoch of the catalogue in Gerard's translation was ad 137. (10)

The star catalogue in the wording of Gerard's translation could also be found appended to the Latin version of the Alfonsine Tables, a much-copied work consisting of tables for calculating the positions of the planets. This ‘Alfonsine catalogue’ is adapted to the epoch 1252 (the beginning of the reign of King Alfonso X of ) by adding a precession correction of 17° 8′ to the longitudes of the stars. It circulated in the later Middle Ages and was first printed in 1483. (11)

The astronomical nomenclature in the Arabic-Latin catalogue version was understandably permeated with names originating in transliterations from the Arabic. This Arabic legacy is recognizable in the hand-written notes on Vopel's manuscript globe. Although many details are hard to read, and a complete description is still a desideratum, I can quote, as an example, the text for the constellation  : AQVILA sive / vultur volans / alkaÿr Martius / ac Jovis naturae / sunt (Fig. 1) In this text two names,  and vultur volans (the flying Eagle), are given for the constellation, one stemming from the Greek, the other from the Arabic tradition. Then follows alkaÿr, a name used in the Renaissance for the brightest star of  (α Aql). Last, the astrological natures of the stars that make up the constellation are described as those of Mars and Jupiter.

The second name given to the constellation, vultur volans, reflects the indigenous Arabic name used in the 1515 edition of Ptolemy's star catalogue. (12)

The star name alkaÿr does not occur in that catalogue, however, but stems from an Arabic-Latin tradition connected with the construction of astrolabes that goes back to the 980s. (13)

The names Anhelar and Abrachaleus for the brightest stars of Gemini (α and β Gem), inscribed on Vopel's manuscript globe, are not mentioned in the 1515 edition of the star catalogue, but they are found in the astrological survey in the Alphonsine Tables, and their use here shows that Vopel knew the Tables.

A number of names on Vopel's manuscript globe cannot be explained by any source material from the Arabic-Latin tradition. Take, for example, the name Antinous inscribed below the head of  on Vopel's manuscript globe (see Fig. 1). Ptolemy used this name to denote a group of unformed stars below  , but it does not occur in the Latin translation by Gerard of Cremona. (16)

Its earliest appearance was in the Latin translation made about 1451, at the request of Pope Nicholas V, directly from the Greek by the humanist George of Trezibond, or Trapezuntius (1395–1484). The first printed edition of Trapezuntius's translation appeared only in . (17)

Trapezentius's humanist version of the star catalogue differs from Gerard of Cremona's Latin translation from the Arabic by the use of what humanists considered ‘good’ Latin. In the translation by Trapezuntius one searches in vain for names developed from Arabic transliteration. The name Vultur volans, for  , has vanished, and the name of Antinous, which had been lost in the Arabic-Latin transmission, is recovered. To the catalogue proper, the editor of the printed edition of 1528 had added extra information in the last column: planetary symbols, variant values for longitude or latitude, short notes and names, the last presumably for easy reference. There he listed, for example, the Greek names Apollinis and Herculis for the brightest stars of Gemini instead of Anhelar and Abrachaleus as recorded on Vopel's manuscript globe. Earlier, another Latin version of the Ptolemaic star catalogue, also translated directly from the Greek text, had been published posthumously by the humanist Georgio Valla (1447–1500) in his mathematical encyclopaedia of 1501, but there are no indications that Vopel knew this work. (18)

The iconography of what are usually referred to as Dürer's maps, because it was he who cut the wood blocks, proved extremely successful throughout the sixteenth century. It served as the model for the planisphere published by Peter Apian (1495–1552) in 1536 and reprinted with a different type set in his Astronomicum Caesarum in 1540. (20) 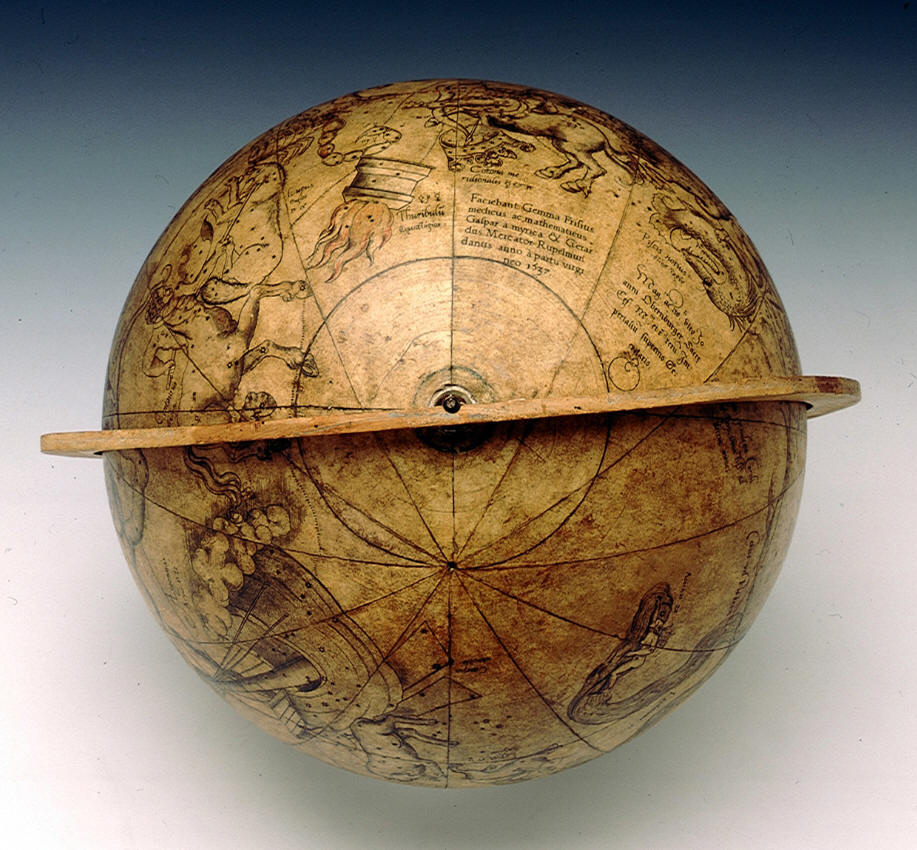 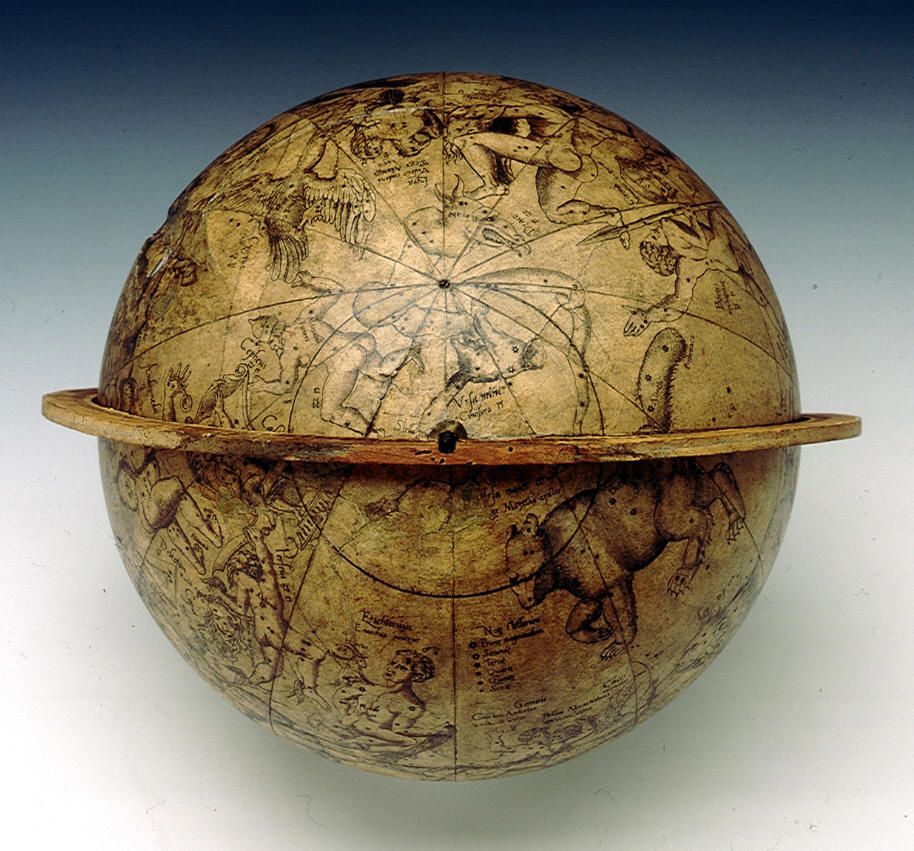 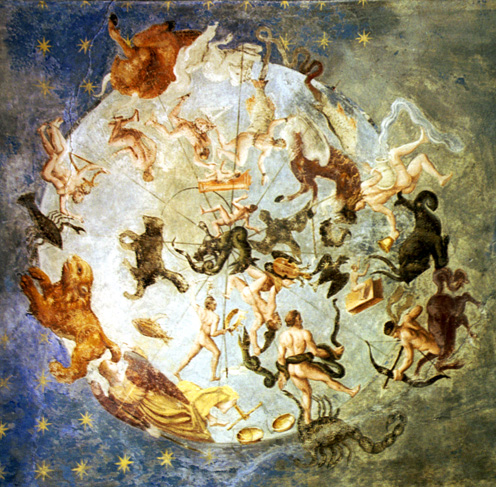 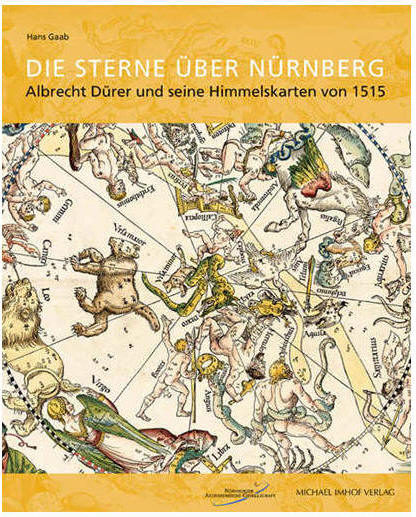 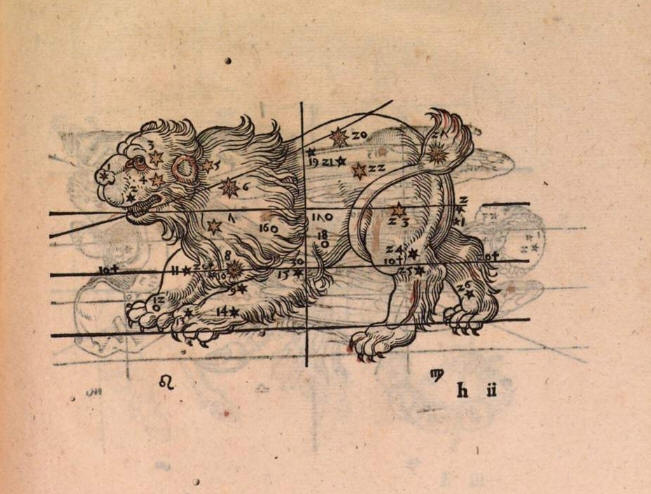