A monumental Chinese celestial chart Huntian yitong xingxiang quantu, one of the largest planispheres published during the Qing dynasty (1636-1912). The work combines both Chinese and Western astronomy, highlights the fundamental role that knowledge of the heavens played in Chinese politics, and illustrates the Qing dynasty’s endeavours to seek authentic truth in ancient texts.

Chinese scholarship in the late Qing dynasty was dominated by ‘Kaozheng’ or ‘evidence based’ scholarship, which was a response to, and reaction from, the Neo-Confucianism that had held sway during the Song (960-1279) and Ming (1368-1636) dynasties. ‘Kaozheng’ sought to strip away the layers of Taoist and Buddhist interpretations of Confucian teaching that had accrued during the Song and Ming dynasties, and which they saw as obscuring its true meaning and nature. In doing so the Qing scholars hoped to not only shed new light on the ancient texts but that the texts might be better guides for contemporary policy and politics. ‘Kaozheng’ with its emphasis on critical thinking, and search for authentic texts, was not only confined to the realm of Confucian scholarship but also bled though into all aspects of Chinese intellectual enquiry, such as science and in the present case astronomy.

The present chart is based on the oldest recorded celestial planisphere, the Tianwen tu 天文圖 produced, during the Southern Song dynasty (1127-1279), by Huang Shang 黃裳 (1146-1194) tutor to Emperor Guangzong’s son. The work was engraved on stone by Wang Zhiyuan  王致远 (1193-1257) in 1247, and set up in the Confucian Temple in Suzhou, where it still stands. As well as depicting the heavens, and providing an introduction to the birth of the cosmos, the planisphere bore an overt political message: that the tian 天 (Sky or Heaven), would bestow tianming 天命 (“The Will of the Sky,” or “The Mandate of Heaven”) on just rulers of China – named Tianzi 天子 (Son of Heaven), similar to the divine right of kings prevalent in Europe. The chart thus reassures the Song Emperor that, despite recently losing the north of China to the Jurchen, he still had the ‘Mandate of Heaven’ and was still China’s rightful ruler. A message that would not have been lost on the Qing scholars, whose own times were beset by internal rebellion and encroachment from belligerent Western powers. The present chart is no mere copy of Huang Shang’s work, and shows significant revision and updating to include new constellations and western geographical information. One of the most intriguing differences can be seen to the title, which contains the characters Huntian 渾天, and illustrates the Qing scholars continuing interest in the Later Han 後漢 dynasty (25-220) (especially Confucian) philosophy and philology. The term refers to Huntian shuo 渾天說 (Spherical-Heaven Theory) which was formulated during the Later Han, and argued that a spherical earth was suspended within a celestial sphere. It displaced an ancient celestial theory, Gaitian shuo 蓋天說 (Canopy-Heaven Theory), which stated that the earth was a square and covered umbrella-like by a celestial hemisphere.

The present chart can be seen as an embodiment of the Qing ‘Kaozheng’ scholars’ principles: the study of ancient, primary sources, in this case the Tianwen tu celestial planisphere, in order to better understand the past, so that it might be a truer and more accurate guide to the present.

The content of the chart can be divided into four sections: the title to the far right, the text surrounding the chart, the celestial chart itself, and the colophon to the far left.

The title: Huntian yitong xingxiang quantu contains more information than the Song chart. The first two characters, Huntian 渾天, refer to Huntian shuo, the second of the three main celestial theories in ancient Chinese astronomy. It was proposed by the Later Han scholar Zhang Heng 張衡 (78-139) who compared the earth and the celestial sphere with the structure of an egg, with earth being the egg yolk and the celestial sphere being the shell. This theory is stated at the beginning of the paragraph entitled Tiandi xing 天地形 (The Shape of Heaven and Earth) printed on the fifth panel from the right below the chart.

The text is a revised version based on the Song chart, with additional celestial and geographical information; most notably information drawn from European Jesuit sources such as Matteo Ricci’s Kunyu wanguo quantu 坤輿萬國全圖 (Complete Map of the World).

The text on the present chart runs from right to left and is divided into sixteen sections with titles positively printed in blue on white; eleven in the upper half of the work and five in the lower.

Before the Great Absolute had unfolded itself the three primal essences, Heaven, Earth, and Man, were involved within it. This was termed original chaos because the intermingled essences had not yet

separated. When the Great Absolute unfolded, the light and pure formed Heaven, the heavy and impure formed Earth, and the mingled pure and impure formed Man. The light and pure constitute spirit, the heavy and impure constitute body, and the union of spirit and body constitutes man. Hence all manifestations of spirit emanate from Heaven, for a natural reason, as they are inherent in the Great Absolute. This evolves into the sun and the moon, divides into the five planets, arranges in order as the twenty-eight mansions, and meets to form the directors and the circumpolar stars. All of these, being involved in the immutable reason, are also in harmony with the rational principle in Man, hence they may be interpreted by reason. Now let us consider and expound the general essentials of the subject as follows. This introduction explains the celestial system as perceived in China using sixteen astronomical entities, which are given printed in blue text in white boxes: Tianti 天體 (The Celestial Body), Diti 地體 (The Terrestrial Body), Liang ji 兩極 (The Two Poles), Riti 日體 (The Sun), Yueti 月體 (The Moon), Jingxing 經星 (The Fixed Stars), Weixing 緯星 (The Planets), Tianhan 天漢 (The Milky Way), Shi’er chen 十二辰 (The Twelve Branches), Shi’er ci 十二次 (The Twelve Positions), Shi’er fen ye 十二分野 (The Twelve Kingdoms), Jiu tian 九天 (The Nine Skies), San ji 三際 (The Three borders), Xingbian 星變 (Star Transformations), Kexing 客星 (The New Star), and Tiandi xing 天地形 (The Shape of the Heaven and Earth).  When compared with the Song chart, the most notable change is the addition of the last five sections, i.e. the Nine Skies, Three Borders, Star Transformations, New Star, and the Shape of Heaven and Earth. The text goes on to deal with geographical matters: much of the ‘new’ geographical information added is drawn from knowledge brought into China by the Jesuits during the sixteenth century. One of the most notable examples is contained in the last paragraph which references Tiandi xing, “地名墨瓦蠟泥加洲…” (The continent called Magallanes…). The “Magallanes” (now Australia)  “墨瓦蠟泥加洲” was first introduced to China by Matteo Ricci 利瑪竇 (1552-1610) and was included on his Kunyu Wanguo Quantu 坤輿萬國全圖 (Complete Map of the World).

The work preserves the key features of the Song chart, i.e. centred on the North Pole, giving the outline of the Milky Way, providing the circle of constant visibility (the smallest circle) and the equator (the third concentric circle from the centre), and depicting all the constellations, and the diameters of the chart and the equator are the same. However, the Qing chart not only adds new constellations but is also rotates the chart by 180 degrees and omits the ecliptic. Furthermore, it adds two further concentric circles: the Tropic of Cancer (inside the equator, the second from the centre) and the Tropic of Capricorn (outside the equator, the fourth from the centre). Unlike the twelve houses of the zodiac devised by Western astronomy, Chinese astronomers identified 28 divisions in the sky known collectively as the Ershi ba xingxiu 二十八星宿 (28 Lunar Lodgings). These divisions are termed xiu 宿 (Mansions or Lunar Lodges), and were used to measure the coordinates of celestial bodies and constellations  along the equator. The Song chart only shows the divisions in the outermost ring, where the Qing depicts divisions throughout the chart stemming from the innermost circle.

We have been able to identify three states of the chart:

There are slight differences between the 1822 and 1826 editions in terms of the textual content and layout. Curiously, the later 1826 editions are more faithful to the earlier Song chart, as the text is almost identical with only minor variations of the characters.

We have been able to trace five extant examples of the 1822 edition:

Two copies with the same colophon as the 1822 edition can also be found in the Omura City Archives and Matura Historical Museum in Japan, but with shorter text and two fewer panels than the present example.

We are only able to trace one institutional example of the March 1826 edition: a) Tsuyama City Museum, Japan.

We are only able to trace two institutional examples of the April 1826 edition:

a) Jissoin Temple in Japan.

b) Adler Planetarium in the USA. 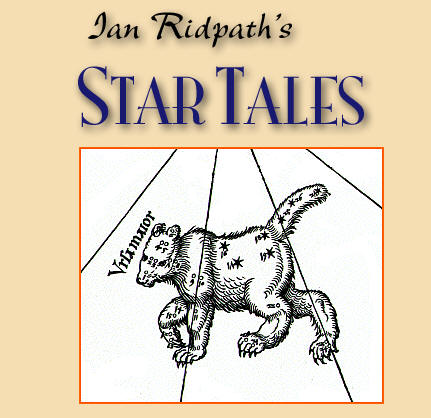 History of Astronomy in China 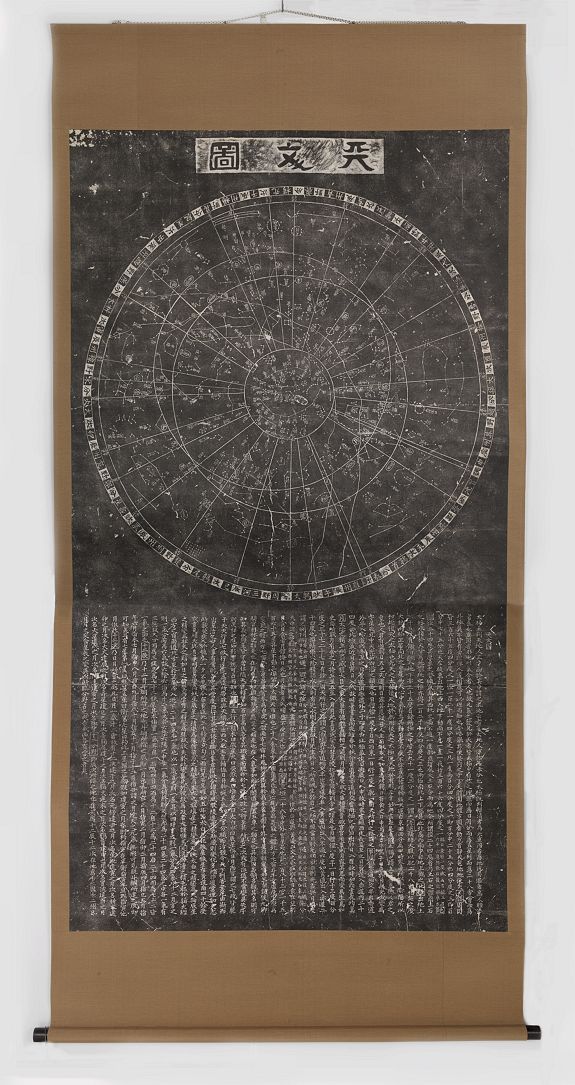 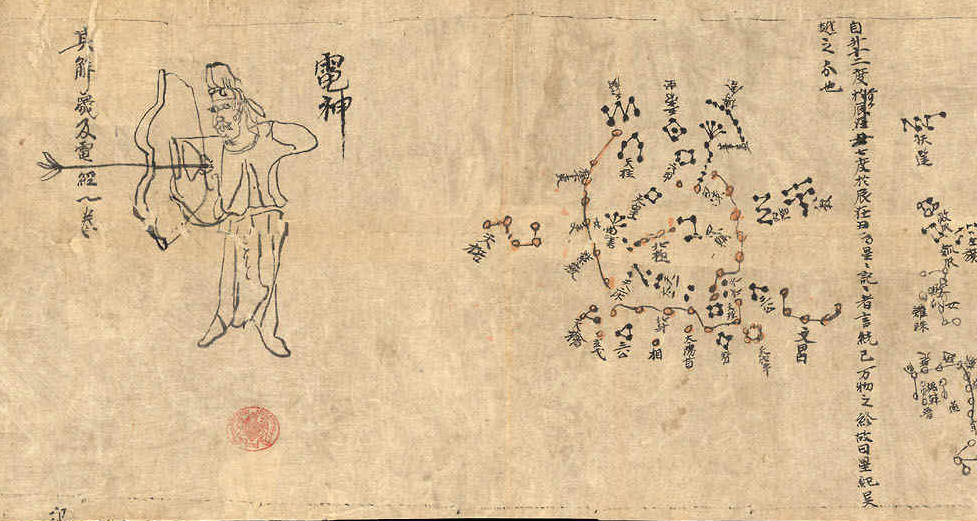 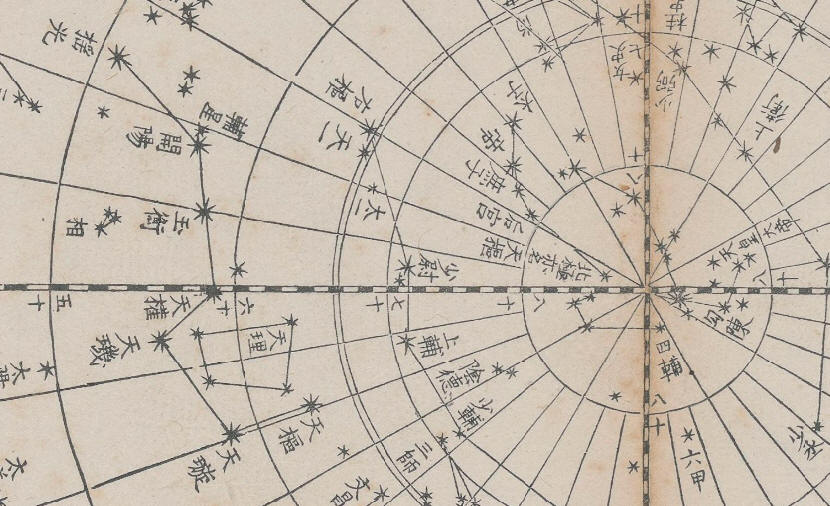 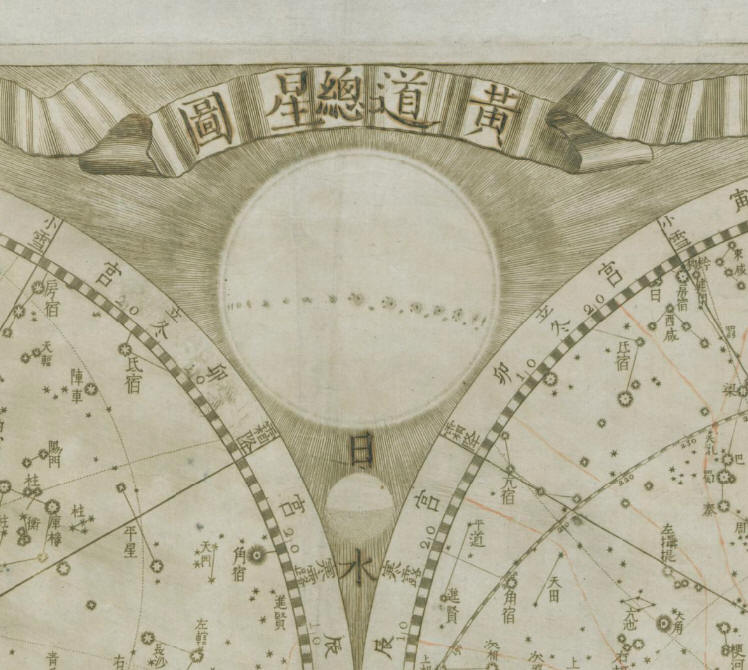 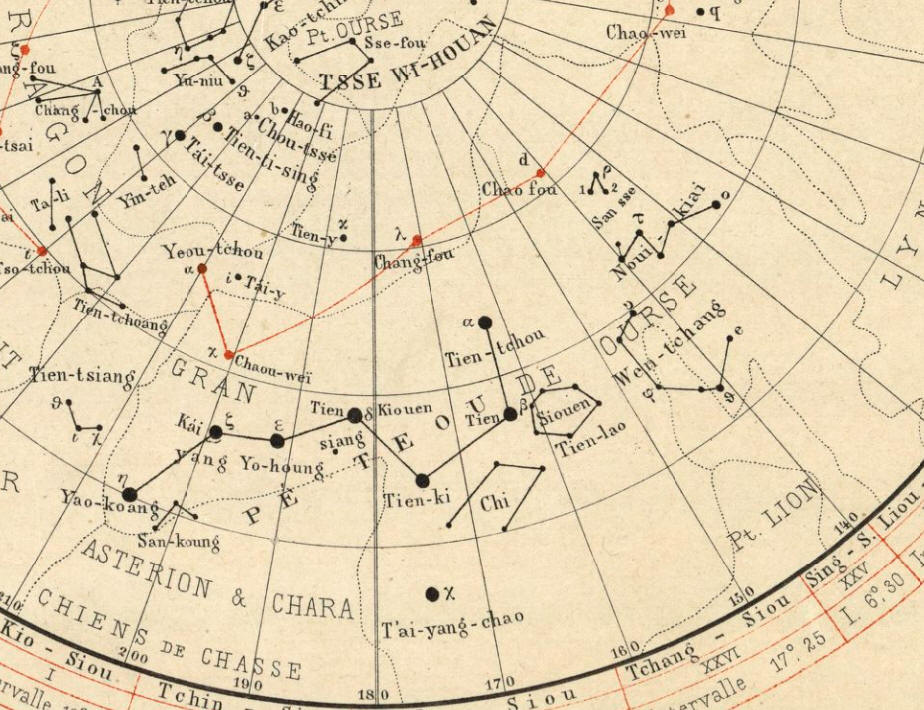 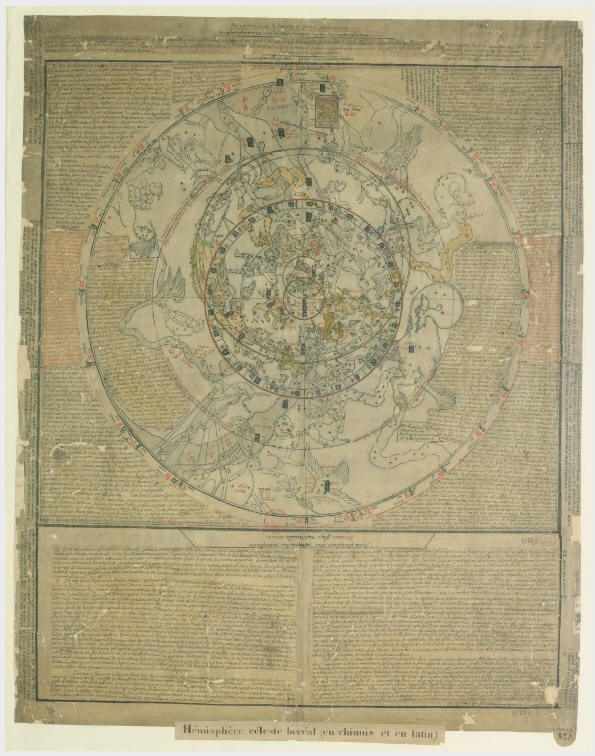 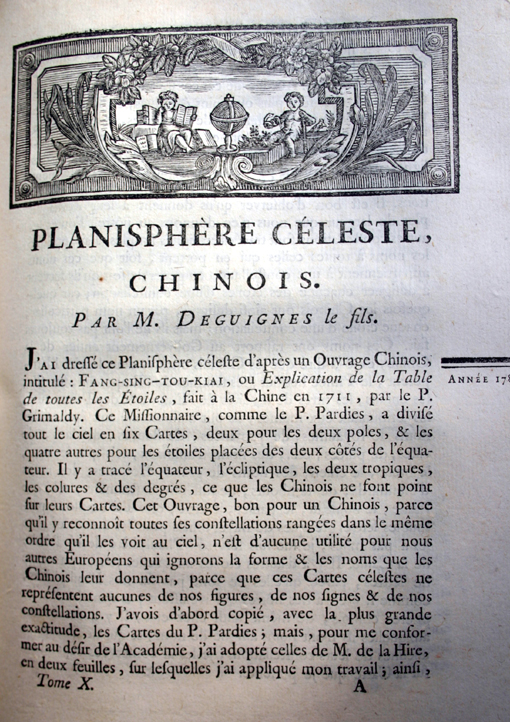